Peg Hansen Had a Dream...

In February 1979 Peg Hansen, a passionate rughooker from Connecticut began a movement to form an open national guild of rughookers by placing an ad in Rug Hooker’s New and Views, Issue 36, September, 1978.

OPEN Guild Peg. Hansen of West Willington, Conn would like to hear from readers who are interested in the formation of an Open Guild of Rug Hooking…

What did “open guild” mean? Peg’s vision was a guild of rughookers who would freely share their talents and ideas without any person or group having any authority. Every member would have a vote in the organization.

Peg further explained in her letter to prospective members: “My hopes are to have a growing membership from all over the country, maybe even the world, to have every locality organize their own smaller groups and do their best to support the national group, —to have several localities form divisions {regions} of the national group.

In the future, I see a regional workshops ... local, regional and national Hooked Rug Exhibits, a newsletter, and much, much more.”

Unfortunately Peg Hansen never saw her dreams for ATHA come true. A few days after the first meeting on April 22, 1979, she was hospitalized and diagnosed with cancer. Although Peg tried to carry on as the new president of ATHA, her health deteriorated quickly. Peg voiced her frustration in a letter to Jill Hurd in May: “If only I could find someone in this area that knows most of the hookers to handle the mail for me. If they could just keep in contact with people and do the best they can, maybe we’ll be able to keep this thing going.”

Betty Kelly, the ATHA secretary, came to the rescue. She handled the correspondence throughout the fall, found officers to serve on the Board and organized the first Annual Meeting held in October, 1979. And the rest is history!

Little did the 15 rughookers know what the future held when they gathered on April 22, 1979 to discuss forming an open rug-hooking guild. Lead by Peg Hansen and chaired by Virginia Pioso of Maryland, the group first decided on a name—the Association of Traditional Hooking Artists (A.T.H.A.) Two officers were elected: Peg Hansen; president, and Betty Kelly; secretary. The other board positions were not filled. Jill Hurd, who had been acting as the group’s secretary, agreed to serve as Representative for Region VI and Peg Hansen was named as Representative for Region I. Dues were set at $15.00 and 14 people paid dues.
The new members defined the purposes of ATHA as: 1) To develop and promote interest in the art of rug hooking, 2) To improve and upgrade the art of hooking and 3) to encourage membership and benefits thereof. The group agreed to meet again in the fall. 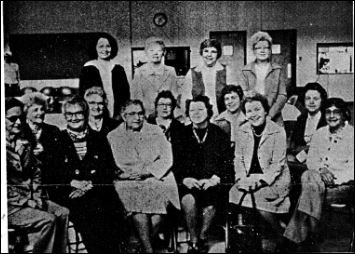 What’s in a Name?

How did ATHA get its name? ATHA Founder Betty Kelly recalls the first meeting and a long discussion about the name:
“Some of us, including me, wanted to call it a "Guild," which sounds a lot friendlier than an "Association," but Pearl McGown was using "Guild," and we didn't want our group to be confused with hers, so "Association" it became. "Traditional" was used so it wouldn't include latch and punch hooking. We debated about including the word "Rug" but decided it was too limiting. "Hookers" was too suggestive, so we settled for "Hooking." And "Artists" was selected because we wanted (and still do!) to have people think of us as such. We really spent a lot of time talking about it. As I went through the first ATHA newsletter, refreshing my memory about our early days, I came across—at least twice—requests to reconsider our name, but it was decided that it was too late—leave it alone. So, for better or worse, that is who we are!”

In March 1980, Jill Hurd, 2nd VP of ATHA and Fran Henry, President of the Northwest Rug and Tapestry Hooking Guild (NRTHG) met to discuss a merger between ATHA and the NRTHG.
Jill Hurd reminisces: “We knew that the founder of the NRTHG, Emilie Tisdale, had written Peg Hansen and suggested that the two guilds combine as one, but there had never been any direct conversations. When I heard that Fran Henry was passing through the Midwest on vacation, I asked if she would stop at my house for lunch so we could talk. That lunch ended up lasting 1 ½ days while we ironed out a possible
merger plan. The next step was to take it back to our boards.”

While the ATHA Board was enthusiastically behind the plan, the more difficult decision fell to the NRTHG members. The Northwest Rug Guild had been founded by Emilie Tisdale in 1977 and had 115 members; ATHA’s membership by May 1980 had reached 225. For the NRTHG to merge, they would have to dissolve their group, give up their name and be folded into a larger organization.

Mary Arrington, a NRTHG member remembers the discussion: “Some NWTHG members felt our guild would be absorbed and would lose our Northwestern artistic identity, but with Emilie {Tisdale} and Fran Henry’s assurances of ATHA's goals and the regional format, the vote to merge was passed by a large majority.”

President Fran Henry sent her final message to the NRTHG members:
“It is with a mixture of joy and sadness that I begin my final letter to you, the members of Northwest Rug and Tapestry Hooking Guild. JOY—to see the principles for which we stand grow and join with others of the same convictions to form a truly National Open Organization that will promote and encourage the creative art of this craft so that all may enjoy and reap the benefits so apparent… The possibilities are unlimited. Here’s to a great future for Rug Hooking Artists.”

At ATHA’s Annual Meeting on October 3, 1980, the merger between ATHA and NRTHG became official—bringing the total ATHA membership to 462 members.

Jill Hurd first created a temporary logo with the ATHA name inside a scroll, which was used in the early newsletters. When ATHA merged with NRTHG in October 1980, the Board asked Emilie Tisdale, founder of NRTHG, and Fran Henry, president of NRTHG, to create a new logo for ATHA. Emilie used the rose that she had created for NRTHG and Fran drew a hook representing ATHA. The hook and the rose were joined together by a line symbolizing the union of the 2 guilds.

Every five years as ATHA approaches another anniversary, Founders and Charter Members have been asked to share their memories of ATHA’s early days. Here are some of their stories:

A Personal Account of a Day with Peg Hansen

Back to Where it Started

1979-1981 Doris DeProspo, MA
On ATHA’s 10th anniversary - "ATHA has had some ups and downs, but with the advice and guidance of Audrey Deere, President of the Ontario Hooking Guild; Joan Moshimer and many others too numerous to mention we have made great progress. The perseverance of past and present Board members has made it possible for us to plan a celebration for our Tenth Anniversary. ATHA is growing and continue to grow
with a little help from everyone."

1981-1983 Marie Oakes, CT
On ATHA’s 10th anniversary (1979) – “My dedication to ATHA will always continue, especially having been one of the original 14 members at the planning meeting called by Peg Hansen on April 22, 1979. I believe the increase in contributions to the Newsletter of pictures, free patterns, articles, poems, etc. have helped improve ATHA's only means of COMMUNICATION. I wish to stress the importance of good fellowship, working together positively, through traditional rug hooking, and encourage growth in ATHA membership.

1983-1987 Ann Redd MI
(On ATHA’s 10th Anniversary – 1979) “We have grown in numbers and strength and must keep growing and expand our services. Our goals are being achieved but it has been done with many headaches along the way. We must work as a team to insure our future as a resource and guide for those involved in our art form. We need to be a well-organized group that supports and encourages women to grow and develop their talents in this field. This can be done through our Newsletter workshops, teacher training, national meetings, exhibits and chapter participation."

1987-1989 D. Marie Bresch NV
(7/20/15) “When I was elected as President, A.T.H.A. was having some moments of strife as well as new Board members who were eager to move forward. Throughout my term we were welcoming many new members and having growing pains. Our newsletter changed with addition of colored covers (paid for by several of the Board members). It was an exciting time. Rug Hooking magazine was just entering the hooking world and A.T.H.A. helped promote it by inviting the Editor to our special events. But the highlight of my term of office was we celebrated the A.T.H.A.10th Anniversary and held the FIRST BIENNIAL. It was hosted by the Mason-Dixon A.T.H.A. Chapter at Chevy Chase, Maryland, just outside Washington, D.C. One of the special things they did was to invite the Smithsonian Institute to preview our Hooking Exhibit Show which had been set up by Ann Ashworth and Jean Armstrong. Smithsonian responded by sending a delegation of representatives. They were fascinated and overwhelmed. The group declared "it is a beautiful show. IT IS REALLY ART. NOT A CRAFT!"

Many thanks for the endeavors of my Board members -- Ann Taylor, Marilyn Bottjer,, Kay Hyde, Valerie Eckmeyer, Celeste Schifino, B.J. Andreas, and Virginia Pioso, Chairman and the Mason-Dixon Chapter for an outstanding First Biennial.”